Unlike blueberries, the juneberry plant is not finicky about soil pH and is quite drought tolerant. When full-grown, they’re attractive bushes, about 8-12 tall and capable of making a hedge. In spring they bloom profusely and beautifully, and in fall they put on a colorful show!  A perfect plant for “edible landscaping.”

SPACING. Spacing on the juneberries depends on whether you want them as a hedge or individual plants.  If hedge, then plant about 3 ft apart and allow all the root sprouts to grow in-between the initial trees. These hedges will be between 8-12′ tall.  If you want taller plants, plant further apart (really up to you, but let’s say 6-12′ apart) and remove the root sprouts as they come up.  Grown this way, the juneberries will be more like 12-15′ tall.  In either case, as the years go by, you can prune down to the height you prefer without hurting the plant. 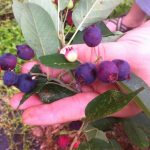 Amelanchier canadensis seedling is native to the eastern U.S. and appears to be very resistant to cedar rust (makes sense since it co-evolved in the East where eastern red cedars are endemic) unlike the Saskatoon (Amelanchier alnifolia). We will have field grown as well as potted juneberry plants. The potted plants will cost more simply to reflect …