Apples are one of the most difficult crops to grow without pesticides, BUT it is possible if you abide with three key rules:

Like everything we offer, other than the pawpaws, new apple trees do best when fall planted. The month between Thanksgiving and Christmas is perfect.

All the following varieties survived ten years of almost total neglect (no water, no sprays, no pruning) from 2000-2010. That should tell you something!

For those who want a really big apple tree with excellent drought resistance that should be around for your grandchildren (hence the name “Posterity”), we’ve grafted several super disease-resistant varieties onto seedling rootstock (sometimes called “standard” rootstock), including Arkansas Black, Enterprise, King David, Shannon, Black Limbertwig, Arkansaw, Tull, Porters Perfection, Williams Pride, Stayman Winesap, and Royal Limbertwig.  Advantages include superior drought and pest resistance and longer lived.  Disadvantages include harder to prune and pick and longer to come into bearing.  The pruning disadvantage can be largely accounted for simply by more intensive pruning to keep the tree shorter.

With the exception of Williams Pride, all the trees in the Posterity Collection have good cider characteristics. It would be conceivable to grow these trees with little or no pruning and shake apples out for cider pressing when ripe. Individual apples would be smaller and less likely to look marketable, but if you’re just going to press them, well…

All these varieties are also available on the semi-dwarfing rootstock MM.111, so if you want these “posterity” trees, please indicate with the word “posterity” or “seedling rootstock” when you order.

North Carolina; date unknown, but certainly before 1900. This apple first got my attention from reading posts on the Facebook “Southern Apples Interest Group,” where folks were touting it’s beauty, flavor, disease resistance and intense aroma! It’s bright red with green stripes. Sweet and tart. It’s a July apple but unlike other early apples it …

(aka Keener’s Seedling). Originated North Carolina, around 1880. The name Rusty Coat refers to its golden russetted skin. A very disease resistant variety. The apple ripens quite late and can hang on the tree into December. Sweet and distinctive. A very good addition to a cider mix. Available on either semi-dwarfing or standard rootstock. 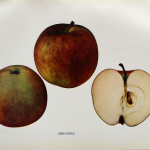 Our state’s oldest heirloom (ca. 1835) and a darn good one! Arkansaw, for all intents and purposes, is identical to another, even older heirloom, Mammoth Black Twig. Arkansaw is an all-purpose apple, boasting sugars, acids, and tannins, making it perfect for cooking and cider. Often confused with Arkansas Black, Arkansaw is more productive, more reliable … 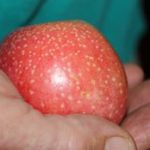 From France! This modern apple was bred for scab immunity but is also resistant to the other major apple diseases. It is very sweet (tastes like bubble gum to me!) and is quite pretty–pink with white spots. Ripens in late summer, early September this year. On MM.111 only. 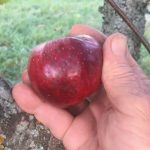 One of the first apple varieties bred for super disease resistance (by Cornell U.), Liberty is a small-ish, firm, juicy, sweet-tart, bright red apple. Like the name implies, it is free from most disease problems, including cedar apple rust! Ripens late August most years.

Despite the name, this is not a sub-variety of Red Delicious; rather, it is its own super-sweet, late summer apple. Highly disease resistant to cedar rust, scab, and fire blight. The apples are usually half red/half green and medium to medium large. 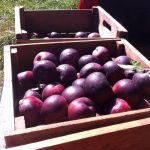 One of the most beautiful of apples, very dark red approaching black—buff it up for a real visual pleasure. King of the keepers, this is a very late apple, usually ready to pick in October; however, it continues to ripen and improve in storage. I’ve eaten them out of my refrigerator as late as April! …

An English (Somerset, 1907) “bittersharp” cider apple.  Most of the traditional English and French cider apples have been ravaged by diseases in the U.S., but  Porter’s Perfection seems to be an exception.  The soon-to-be-famous fruit farmer/explorer Eliza Greenman brought us Porter’s wood from Virginia, where she says it’s thriving.  And so it is here, too…so … 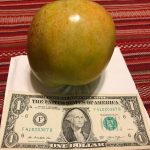 We are really excited about being able to offer this Arkansas heirloom (ca. 1860) as it’s listed as “Extinct” in Calhoun’s Old Southern Apples. Why do we think we have the original ‘Tull’?  Because Arkansas apple explorer extraordinaire Scott Gothard found Joe Duvall of the Tull family who took Scott to a Tull tree growing … 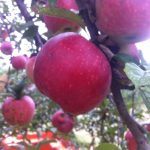 “A Stayman grower is a benefactor to all mankind!” –Georgia grower, and I concur! A late apple resistant to all major diseases and a great all-purpose apple: fresh eating, cider, keeping, and cooking!  It is sweet and tart and with just a touch of tannins, which makes it a near perfect cider apple, all by … 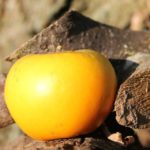 Another PRI apple with superb disease resistance (I have seen fire blight but nothing fatal; don’t over-fertilize or over-prune this variety because that can lead to vigorous shoots that are more susceptible to blight). This is a rarity: a yellow apple with cedar rust resistance! A beautiful, yellow apple with lemony flavor early, mellowing to …

Very crisp and crunchy even in the South, though it’s a Yankee (Cornell U. 1924 or thereabouts)(btw, this is not the same apple as the French ‘Orleans Reinette’ from the 1700s). Red Delicious is one of its parents, and Orleans has that same elongated “sheeps nose” shape. But Orleans is larger, stores better and is …

A nearly perfect apple: super disease resistant to rust, scab, and blight AND sweet and tart (makes a great cider without blending other apples) + excellent keeping quality + large and pretty. It ripens in late summer (August) and has had summer rot problems in years with very wet summers, but still very much worth …

The Spurlock family in Madison County has passed this down through several generations. The apple is mostly red on a green background, sweet, and very disease resistant. It has survived with no spraying and minimum care for decades! 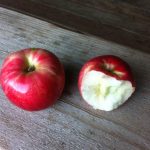 -Sold out- An heirloom apple from Tennessee that has superb, sweet flavor and excellent resistance to all the major diseases. It even misses the summer rots by virtue of its earliness. This is our earliest apple, ripening up sometime in June. Like most early apples, it doesn’t keep well, but it makes superb apple sauce! … 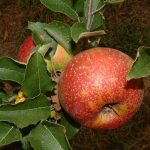 -Sold out- An heirloom from near Cane Hill, AR, found growing on the farm of John Oliver in the early 1800s.  Orange-red with conspicuous white spots, this is a visually striking apple!  Good size, very good flavor, good resistance to everything except rust, which it is moderately susceptible to but never to the point of … 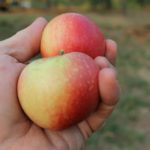 An heirloom variety from Durham, AR, 1893. Thought to be a chance cross between Jonathan and Arkansas Black, it has some of the best characteristics of both. It is not as disease resistant as the PRI apples, but I always get some…and it’s worth it. My favorite apple flavor-wise: sugar and spice. Ripens in early-mid …

-Sold out- Another great variety from the Purdue-Rutgers-Illinois (PRI) disease-resistant apple breeding program, and sister tree to Williams Pride, Pristine, and Enterprise. Like those, it’s SUPER disease resistant, though it is getting into the summer rot season, ripening in late July. (Remember, there’s really no strong resistance to the summer rots in ANY variety, so … 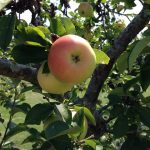 Another PRI apple with superb disease resistance (I have seen fire blight but nothing fatal; don’t over-fertilize or over-prune this variety because that can lead to vigorous shoots that are more susceptible to blight). This is a rarity: a yellow apple with cedar rust resistance! A beautiful, yellow apple with lemony flavor early, mellowing to … 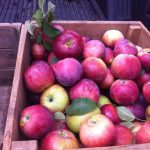 If you were to buy only one apple, this should be it! A very early (early July), red-purple apple with a fragrant floral sweetness. Best early apple I’ve ever eaten. Comes from the Purdue-Rutgers-Illinois (PRI) breeding program—SUPER disease resistant. Buff it on your pants leg—the natural wax makes a beautiful shine. Really, everyone should have … 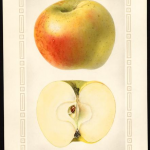 A large to very large yellow apple with a red blush, Shannon is another heirloom from the Cane Hill, AR, area, ca. 1840. We haven’t fruited it yet so I can’t vouch for its rot resistance, but it seems moderately resistant to cedar rust (I see some rust lesions on leaves but not severe and …